The colourful fantasia, performed with stunning boldness and powerful sound effects, captures a cathartic event. The light brown masses of sky-high mountain ranges echoing the will of the sky above, the stark white patches of boldly craggy rocky ridges, the dark undulations of wide valley walls, the crystal-clear sea and the gently falling pearl springs. ... all witness to the great ages of all that is heaven-ordained to be whole, whole and eternal... whether it be creative creation or destructive destruction. The gods, who maintain the order of the world in time and space, are content to unleash the dark forces of the abyss upon mortals, and to condone human evil. The blood-soaked lands burned after the violent Roman conquests stir up seething passions in the bowels of the earth. And the gods below, led by Vulcanus, are preparing for a mighty battle, who sets the scene for a sacred clash in the city of Pompeii. The punishing cataclysm was judged on 24 August of the year 79 AD. The fiery shower of arrows falling from the war of clouds set off terrifying torrents of stone, the upper and lower waters crashing into each other, creating gaping cracks and fissures metres wide. The terror that swirls up in a split second stirs unprecedented, otherworldly forces. The celestial realm merges with the earth, brilliant heavens fall through the torn vault. At the sound of the terrifying cataclysm, all the spirits of the earth head for a single eruption centre, the horn of Vesuvius fills with gas and the wrath of the abyss spreads like glowing lava across the universe. The painterly balance of this work of art, which displays a whole spectrum of brilliant hues, is maintained throughout, the master's hand steady throughout the work, the storming, disintegrating force of the organic order of the details brought together with a quick eye. Despite the terrifying destruction of the energies unleashed, the expansive, grandiose visionary experience holds the potential for uplift. After the eruption of the all-destroying volcano, the dead souls are reduced to golden stones covered in volcanic ash, and rise up into the stars, shining through the orange-red lines of the universe. 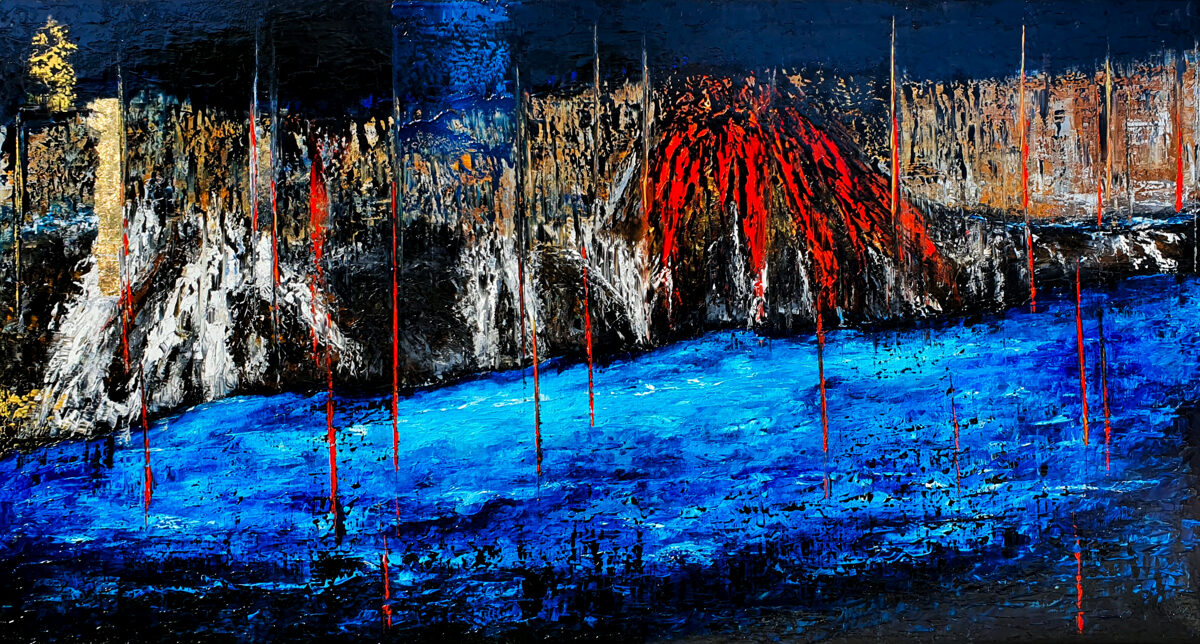